So how long have you been living in Vernal?” the man asked. He had followed me around during the whole job asking questions and making small talk.  He’s a retired man, and for some reason, these older guys seem to like me.  I like them too.  I would say this is one of the reasons I enjoy my job.  I set up satellite television.  I meet lots of nice people and it’s very satisfying to provide them with good service and a product that I know they’ll enjoy.

“But you’re not from Idaho though, are you?”

“On no”, I said, “Five years before that I moved down from Alberta, Canada.”  I let that hang in the air for a minute.  I’ve been away from the south for almost ten years now, but I still have a noticeable southern accent.

He looked at me like he wanted to say something, but he didn’t.

“I was born in Virginia and did most of my growing up in Savannah, Georgia”, I said.

“Well, I didn’t think you were Canadian!”, he said with a chuckle.  “I know people from Canada and they don’t talk like you!”

I went about finishing my job.  The new dish was on the house and all the cables run.  I had the new receivers plugged in and downloading their software.  It would take about 45 minutes or so for everything to be done.  The man helped me gather up all my tools and the packaging that I needed to take out to my truck.

“So how in the world did you end up here?” he asked.

“Would you believe that I came out west because of a girl?” I smiled.

He gave me a little elbow in the ribs and said, “Oh I believe it” he said, “I’ve been known to do crazy things because of a certain girl.”

I knew what the nudge and the wink of his eye meant.  His wife had met me at the door when I arrived and she was a dear.  She was just cute and her voice so soft, right up until she hollered across the house, “William!  The Dish guy is here!”  I could hear him making his way up the stairs and across the house. She returned to her soft lady voice, “He’ll show you want we want to do” she said.

It could be intuition, but more likely it comes from visiting the homes of lots of retirees; I knew right away that she was putting ‘William’ on a project with me and taking a couple of uninterrupted hours for herself.  At any rate, I knew right away that this old guy and I were going to become good friends before the job was done.

“My wife and I just got home from serving a mission in British Columbia about 8 months ago.  It was one of the best experiences of my life, but the truth is, I would’ve never gone on my own—I did it for the ‘girl’.  Do you know that we have been married for 51 years?”

I started calculating his age in my head and began to think how he must be a little older than I would’ve guessed.  “That’s awesome” I said.

“It’s been like that all of our lives together” he said, “If there’s something she wants, I do my level best to make it happen.  So if a man tells me that he took up roots and moved across the country for a woman, I don’t find it hard to believe.”

I told my new friend a little of the story of how I met my wife and how we came to be in Vernal, Utah.  He listened to my story and, as if to draw a parallel to his life and mine, he said, “It’s funny how we go along making choices in our lives, isn’t it?  I mean, about 51 years ago I met a pretty girl at a drive-in restaurant.  I could have remained shy, but I worked up the courage to ask her on a date.  That decision, all by itself did not seem like so much, but 3 months later I was a married man.  I’ll bet I didn’t ponder that decision a full minute and it set the course for my entire adult life!”

We talked on about life and choices until my job was done and I had to leave.  I wished them well as I started down the sidewalk to my truck.  As I looked back I noticed that they were holding hands as they walked back into the house.

It was dark when I finally got home.  My wife and little boy have been away for several weeks in Alberta.  Her father is about to pass and she has been away tending to him.  Our son is going to be 8 years old this year and when he’s gone our home has all the personality of a tomb.

I work out of our home as a remote satellite TV and Internet technician.  My evening routine consists of doing a quick inventory count, restocking my truck, and then sending a report to the warehouse.  Most nights I can’t get it done fast enough, knowing that my family is waiting inside for me, but these days I have all the time in the world.  Going in the house only reminds me that I’m out here all alone.

I say ‘alone’ but that’s not quite true.  We have a couple of demanding horses that insist on being fed before my truck comes to a complete stop in the drive every evening.  And a very nice dog, a female German Shepherd named Scout, who is always happy to see me.  Everybody gets a couple of extra pats tonight as a reward for being good company.

When I finished up in the shop tonight, I was just about to turn out the lights and go into the house, when I began to think about the old fella and his philosophy on life-changing decisions.  We have a ton of boxes in part of our garage that haven’t been opened since we left Canada in 2005.  Among our treasures there, is a black locker with some journals and correspondence that I have carried around for a long time.  I opened it up and grabbed a binder and an old journal and took them into the house with me.

I warmed up some soup and made myself a sandwich, but I wasn’t really hungry.  I kept thinking about the earlier discussion that I had with my new old friend, and I was eager to look at some of the history of my life in the context of simple decisions. 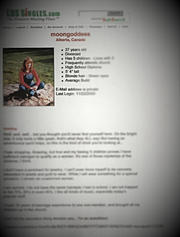 One of the first pages in the binder was Selena’s original profile from the singles website.  It was simple and she wasn’t ‘selling’.  I was both intrigued and amused.  I remember my disappointment when I saw that she was all the way up in Alberta, Canada and I made a quick decision not to contact her, but changed my mind as I was about to log off for the night.  I sent her a short message, and that seemingly insignificant choice set the course for a most wonderful adventure.

My friend, William said that he could not have imagined his life turning out any other way, and it all hinged on a split-second decision one night at a drive-in.  I know exactly what he means.  My life before meeting Selena is a million years in the past.  When I think how perfect the adventure has been, even the not-so-happy times, I have no doubt it was designed just for me.

Duane has an artistic side and sent me some of his creations.  When I found the page Duane made for our five month ‘anniversary’ of knowing each other, I couldn’t help but smile and share.  How could I have missed the fact that he appears to be psychic?! Fourteen years later, we are five months away from the launch of our first book… 3,000 Miles To Eternity: A True Internet Love Story!

Unauthorized use and/or duplication of this material without express and written permission from this site’s author and/or owner is strictly prohibited. Excerpts and links may be used, provided that full and clear credit is given to Duane & Selena Pannell and Pannell Bytes with appropriate and specific direction to the original content. Original mages may not be used without express permission of site owners or photographers.